Connecting with the heart and soul of Vietnamese cuisine

In Vietnam, cooking culture is a vibrant community event, and food is a feast for all the senses. It is tasty, colourful, crunchy, delicately textured, and abundantly healthy. Meals are traditionally served in a large bowl or tray to share with the whole family. There are up to 8,000 vibrant festivals annually throughout Vietnam, nearly all of them involving food. And whether you’re travelling alone or in a small group of likeminded people, shared mealtimes offer some of the richest travel experiences available. 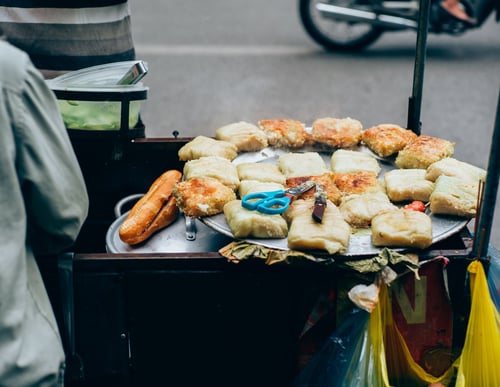 The best place to experience Vietnamese cuisine is on the streets. Locals gather at street stands in the late afternoon for a refreshing ba hoi (rice beer), sitting on simple plastic chairs out on the sidewalk. Many of these modest eateries specialise in a single dish, such as noodle-based pho or baguette-based banh mi (and there are no prizes for guessing which is a Chinese legacy and which a French one). You won’t find these places on a website, nor can you make a reservation, but it may be the best food you’ll experience on your trip, unless you’re lucky enough to be invited into a local family’s home. The tasty snacks available on the street are healthy, too, most typically consisting of egg noodles, rice cakes, sweet bean soups, boiled sweet potato, cassava, none of them with any added salt or sugar.

The idea of balance is central to Vietnamese cuisine. Salty, sweet, sour, spicy and bitter flavours are combined in precise proportions to unlock flavours and enhance the overall effect. Less oil is used for cooking than in China, and many dishes are boiled or minimally steamed. Thus, the freshness and natural flavour of the food is retained as much as possible. Dairy is hardly used at all in favour of the light, fresh flavours of herbs and vegetables, lots of leafy greens and fish, very little animal protein and fat, and a moderate amount of sugar.

On our guided tour of Vietnam, locals take us on a street food tour of Hanoi on the back of their scooters - they know the best places to go! 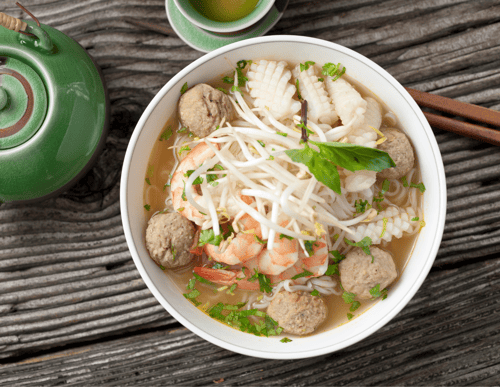 Pho is ubiquitous in Vietnam, universally popular for its rounded flavour and eaten for breakfast, lunch or dinner. In essence it is a soup based on rice noodles. Pho became popular after the Vietnam War when the USSR provided aid (1954), at a time when poor people had very little access to meat. The Colonial French tended to leave beef bones out after cooking, which locals put to good use in the soup, so it is traditionally very light.

Nowadays, pho is a bowl of soft, white noodles with juicy beef slices sprinkled with green onion and accompanied with aromatic herbs. Pho is also the name given to the noodles and many other dishes made with them.

There are many regional variants, due to differences in climate and geography. In Northern Vietnam fewer spices are grown, and not so many cattle are reared, so milder, freshwater ingredients such as fish, molluscs and crab are used. In Central Vietnam, chillies and other spices are plentiful, so the dish becomes spicier. And you know you’re in the south when the Pho is accompanied with bean sprouts and Thai basil. 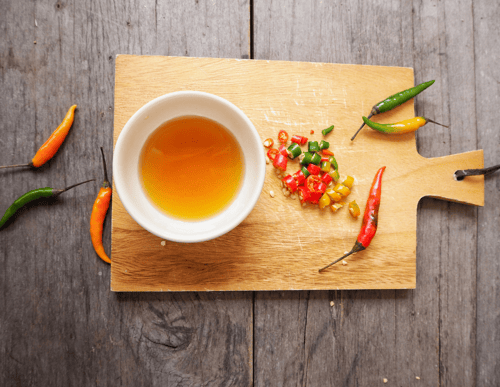 Both rice and fish sauce are served at most meals in Vietnamese households. There are no individual portions among family members during a meal and each must eat respectfully from the central dish to ensure everyone gets enough.

Everyone dips into the central bowl of fish sauce, which some say symbolises Vietnamese solidarity. It is made from fermented anchovies and has a salty and umami flavour.

The cuisine of central Vietnam is heavily influenced by the tastes of the emperors of the Nguyen Dynasty and is often complex and luxurious, with added ingredients from distant lands. In the Cham Dynasty from the 7th to 10th centuries, the charming town of Hoi An was the epicentre of the spice trading route. Later, from the 15th to 19th centuries, it became a trading port for the Chinese, Japanese, Indian and Dutch. The cuisine of multicultural Hoi An has a unique range of dishes reflecting these influences, such as Cao Lau, which includes Japanese-style noodles, Chinese-style roast pork pieces and a special Hoi An chilli sauce. A veritable melting pot.

In the south, in Ho Chi Minh City for example, dishes tend to be slightly sweeter and less spicy with a lot of fresh herbs, due to its proximity to the fertile Mekong Delta. The climate in the north is a bit cooler and there is more influence from Laos and Cambodia, resulting in curries and noodles.

Sticky rice has been grown in Vietnam since the Stone Age, in the same kind of wet field system still used today. There are countless myths, legends and folk tales surrounding this crucial staple food which have given rise to a wealth of rituals and customs. Many of these are centred around the cult to the Mother Goddess (Dao Mau, which UNESCO designated an intangible cultural heritage in 2016). The custom of leaving rice ball offerings in Buddhist temples also dates back to earlier religions. The earliest written symbol for happiness and other blessings in ancient Vietnamese has a square symbolising a rice paddy at its centre, and adorns the doors of many Vietnamese houses. 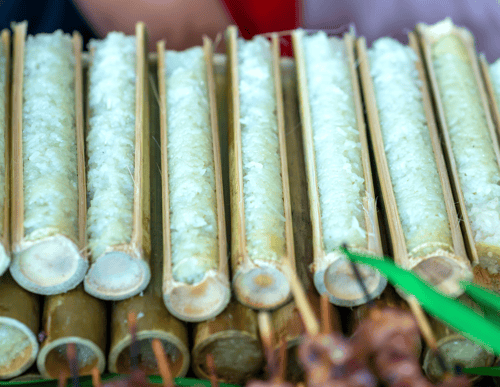 Known locally as lam rice, bamboo cooked rice is a typical dish of many of the ethnic minorities in the mountainous area of Northern Vietnam (such as the Sapa, Moc Chau, etc.) and is made from sticky rice which is grown on the hills.

Originally, bamboo cooked rice was conceived as a food for long journeys in the forests. While travelling, rice was cooked in a thick piece of bamboo cane instead of a pot. It’s a fragrant blend of rice, stream water (for the best results) and has a slight aroma of bamboo. The cane is sealed with banana leaves and roasted over hot coals or an open fire for about half an hour.

Bamboo cooked rice is served with grilled chicken or grilled pork, with a sprinkling of sesame seeds and salt.

Another great favourite is clay pot chicken. According to tradition, the more you use a particular clay pot for cooking, the tastier the resulting food. Flavours become more rounded, and the pot maintains the temperature, nutritional value and individual tastes of the ingredients. In the past, pots were made entirely of clay and fired at high temperatures. Now ceramic pots are also used, which are easier to clean and more robust. The recipe for clay pot chicken involves some marinating and caramelising, and ginger is usually used, which creates a deliciously sticky sweet and salty sauce for the chicken. It’s traditionally served with hot steamed rice and shared as a family.

If you’re longing to share in the cuisine and culture of Vietnam while at thesame time empowering local ethnic families by having them teach you how to cook (and eat!) bamboo cooked rice and clay pot chicken, or if you want a local to take you to one of their favourite eateries, this trip could be for you:

Our small group tour of Vietnam & Cambodia is full of culinary delights. If you're in your 30s and 40s, learn how to prepare bamboo cooked rice and other dishes with local ethnic families.