The ABC of Amazigh (Berber) Culture

The original inhabitants of the Maghreb region of North Africa, the Berbers have survived the Phoenicians, the Romans, the Carthaginians, the Byzantines, the Vandals, the Arabs, and the French. In fact, there’s not much in Morocco that hasn’t been touched by their culture – from traditional Berber dishes of couscous and tagine to place names with roots in Berber languages, such as Chefchaouen, meaning “look at horns” and referring to the two mountain peaks close by, as well as Tunis, Marrakesh, Atlas, and Morocco itself. (The word “Merino”, incidentally, is also of Berber origin, its roots dating back to the Umayyad conquest of Hispania and referring to a North African sheep bred in Spain.) But before we get started, let’s just clear one thing up.

What’s in a name?

Commonly known in the English-speaking world as Berbers, indigenous communities of the Maghreb prefer to call themselves Imazighen (or in the singular Amazigh). It’s not entirely certain where Amazigh comes from, perhaps hailing back to a chief of the Meshwesh tribe and latinised as Mazices, but it could also have its root in one of the many Berber languages, meaning either “free man” or “noble man”.  “Berber” on the other hand has the same etymological root as barbarian, a pejorative word used by the Ancient Greeks to refer to any non-Greek-speaking peoples. 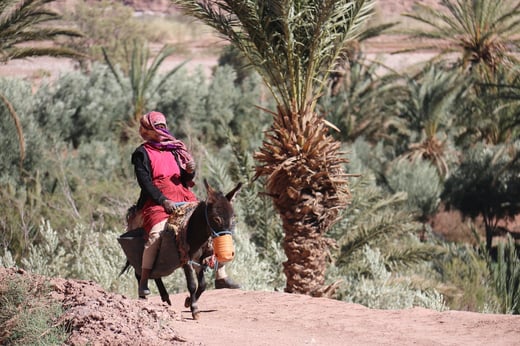 Almost everyone in Morocco is at least a little bit Amazigh. And despite centuries of subjugation, there is now an incredible fluidity between who or what is Amazigh and what is not, with about a third of all Moroccans identifying as Amazigh, often due to the fact that they can speak an Amazigh language or because they’re interested in preserving its culture. There are in fact over 30 Amazigh languages, collectively known as Tamazight, with around 30 to 40 million speakers all across Africa. Amazigh written script, known as Tifinagh, also dates back to ancient times and can even be found on prehistoric rock art.

Often considered nomadic, perhaps due to their ability to live beyond the comforts of the towns and lowlands, eking out an existence amidst the ruthless sands of the Sahara or the unforgiving peaks of the Atlas and Rif Mountains, Amazigh peoples are tribal by nature, in clans that are often a conglomeration of families with a chief at its head. Tribes can be both matriarchal and patriarchal, and there are historical accounts of some formidable female Amazigh chiefs. Even today, after centuries of assimilation with Arab culture and Muslim religion, women in some tribes can choose their own husbands and often don’t wear a veil.

Stretching all the way from Mauritania, Morocco, Algeria, Tunisia, and Libya to the Tuareg peoples of Mali and Burkina Faso, the Imazighen aren't, however, necessarily nomadic. It’s an association largely due to the nomadic Tuareg people, also Imazighen, who wear the daraa and tagelmust, the traditional blue robes of the Berber and a cobalt scarf worn as a turban – both of which offer protection from the ferocious sandstorms of the Sahara and the sun. The characteristic blue colour incidentally also came about through the discovery of indigo dyes, offering everyday Imazighen an alternative to the white daraas of the rich, who were wealthy enough to regularly wash them, and the black daraas usually worn by slaves. 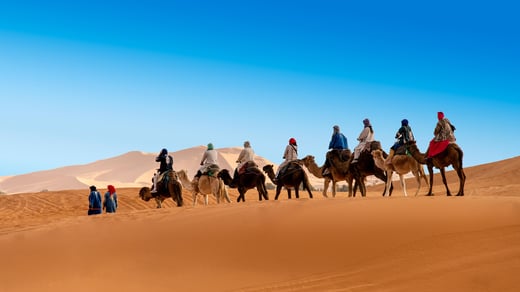 Further north, however, in the mountains between the Sahara and the Mediterranean Sea, Amazigh tribes would traditionally raise livestock, perhaps moving from one pasture to another to graze their sheep or goats, but still generally living within a permanent community. And it’s thanks to the Imazighen living in remote towns away from their country’s rulers that they have managed to preserve their culture so successfully. The UNESCO World Heritage town of Aït Benhaddou is a perfect example. Situated on the trade route between Marrakesh and the Sahara Desert, the town is a traditional Berber ksour, a fortified town with a kasbah (or fort) and ghorfs (multi-storey fortified granaries), the like of which can be found all across Morocco and Algeria. Constructed of rammed earth and adobe, they are decorated with traditional geometric motifs. And you can find similar symbols decorating the traditional Amazigh kilims woven using traditional tapestry methods as well as on traditional ceramics and jewellery, forged from silver as it’s believed by the Imazighen to bring good luck. 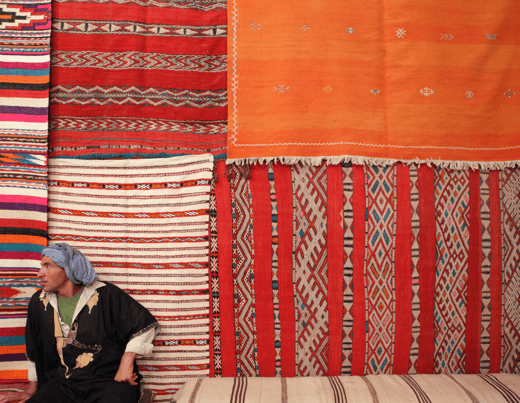 While in the past, there were both Christian and Jewish Berber communities, tribes now have largely adopted the Arab culture and Muslim religion, their leaders often believed to descend directly from Mohammed. But alongside their Muslim faith, traditional beliefs continue to this day, with Moroccan culture embracing the Amazigh belief in marabouts – holy men with divine grace, or baraka, who can also perform miracles. Also, as well as traditional Muslim feasts, Berber festivals also dot their spiritual calendar, including Boujloud shortly after Eid, in which men dress up in goat skins, paint their faces with charcoal, and attach hooves to their hands as a demonstration of good conquering evil or Yennayer, the Amazigh New Year, celebrated on 14th January to mark the new agricultural year, with a large helping of couscous and dancing.

Music and dancing are in fact very important to Amazigh culture, and Taskiwine, a martial dance, is on UNESCO’s List of Intangible Cultural Heritage in Need of Urgent Safeguarding, while Kabyle and Tuareg music have both already found international audiences. Traditional Amazigh music is often played at village dances and festivities, but there’s also ritual music for weddings and other important ceremonies as well as professional music troupes, normally comprising drums, a rabab – a single-stringed lute played with a bow, a double clarinet, and an amydaz – a poet who improvises lyrics while the others play.

But perhaps the most common sign of Amazigh culture you’ll notice while travelling through Morocco and the Maghreb is the food. Alongside couscous and tagines, traditionally cooked in a conical earthenware pot to ensure that no precious water is lost, you’ll also find Berber dishes all over Morocco, such as merguez lamb sausages, msemmen flatbread or tafarnout bread, made with traditional yeast and cooked over hot coals in a clay oven, as well as bastila, a pie originally containing pigeon and now frequently replaced with chicken. You might even encounter akanaf, a kind of barbecue in which a whole sheep is roasted or tahricht, sheep sweetbreads (brains, tripe, lungs, and heart) rolled up in intestines and cooked over embers on an oak stick. Made with tomatoes and chillies from the New World, both shakshuka and harissa are also said to be Berber dishes, dating back to the 16th century, when Muslims and Jews fled Spain following the Reconquista.

Spiced with saffron, cumin, ginger, paprika, and cinnamon, Amazigh cuisine also contains lots of dates, almonds, and olives, as well as goat and lamb from their own herds, and seasonal vegetables and fruits. Smen is a fermented and heavily salted butter made from ewe’s or goat’s milk that is also often used to enrich many Amazigh dishes. (An old Amazigh custom dictates a sealed jar of smen be buried upon the birth of a daughter, to be dug up on her wedding day to flavour the guests’ food.) There’s also no shortage of sweets in Amazigh cuisine, with thin bourjeje pancakes, thicker baghrir pancakes soaked in butter and honey, or bouchiar, a kind of wafer also soaked in butter and honey.

If all that’s whet your appetite to discover Amazigh culture, why not take a look at our 8-day tour of Morocco where you can visit Aït Benhaddou and hear stories from nomadic Imazighen on the edge of the Sahara.